(CNN)China has become only the third country in the world to successfully collect rocks from the moon. In the early hours of Thursday morning Beijing time, the country’s unmanned Chang’e-5 mission returned to Earth carrying the country’s first moon samples, according to Chinese state media outlet Xinhua.The samples were retrieved from a previously unvisited area of the moon, and are also the first samples to be collected by any country since the 1970s. The returning capsule landed in Siziwang Banner, which lies north of China’s Inner Mongolia Autonomous Region, just before 2 a.m. Thursday Beijing time (1 p.m. ET Wednesday), according to China’s National Space Administration (CNSA). 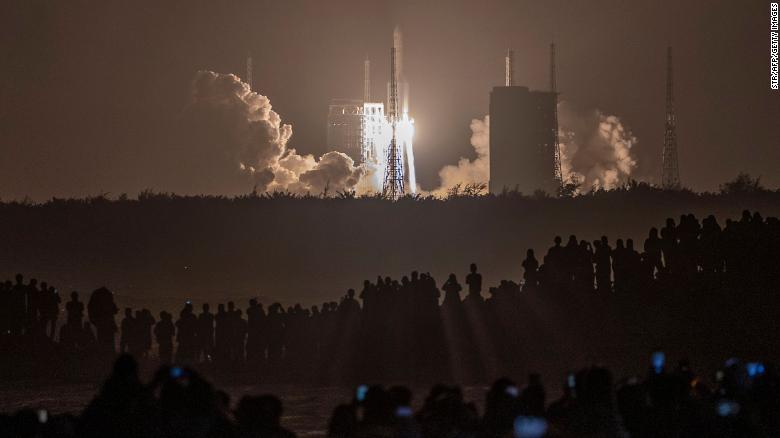 A Long March 5 rocket carrying China’s Chang’e-5 lunar probe launches from the Wenchang Space Center on November 24.The probe, named after the ancient Chinese goddess of the moon, first took off from the Wenchang Spacecraft Launch Site in Hainan on November 24.It landed on the near side of the moon on December 1, on a massive lava plain known as Oceanus Procellarum, or “Ocean of Storms.”

According to NASA, this large dark spot could be a scar from a giant cosmic impact that created an ancient sea of magma.The samples from this region could help scientists understand more about the moon’s origins and foundations — and set the foundation for more complex sample retrieval missions in the future, potentially on other planets.After the returning capsule landed back on Earth, it will be airlifted to Beijing, where the capsule will be opened and the samples will be ready for analysis and study, according to Chinese state media news agency Xinhua.

China will also make some of the samples available to scientists in other countries, said Pei Zhaoyu, a deputy director at the CNSA.Only two countries have collected rocks from the moon. For China, it’s just the beginningChinese scientists are already drawing up plans for future lunar exploration, said Pei — including a project to construct a scientific research station on the moon.”We hope to cooperate with other countries to build the international lunar scientific research station, which could provide a shared platform for lunar scientific exploration and technological experiments,” Pei said, according to Xinhua.China’s achievement follows the United States and the Soviet Union, which both collected lunar samples decades ago.In the Apollo programme, which first put men on the moon, the United States landed 12 astronauts over six flights from 1969 to 1972, bringing back 382 kg (842 pounds) of rocks and soil.The Soviet Union deployed three successful robotic sample return missions in the 1970s. The last, the Luna 24, retrieved 170.1 grams (6 ounces) of samples in 1976 from Mare Crisium, or “Sea of Crises.”